Daily Dispatch distances itself from the National Press Club

I am having problems accessing this leader from the Daily Dispatch website, so I have posted it here. This was today’s editorial from the newspaper on the National Press Club rhino newsmaker debacle .

Marikana is before rhino

WHEN the rhino was announced on Friday night as South Africa’s newsmaker of 2012, many thought it a joke, while others reacted with utter disbelief.
The National Press Club said its decision to declare the rhino the newsmaker comes after the slaughter of 668 of these animals in South African parks last year.
Their plight trumped, among other news of national importance, the killing of Lonmin mine work ers, the plight of thousands of children affected by the Limpopo textbook saga, President Jacob Zu ma’s Nkandla home controversy and Julius Malema’s expulsion from the ANC Youth League.
The Daily Dispatch would like to place it on record that the NPC, a self-mandated entity founded as the Pretoria Press Club, does not speak on its behalf and this news paper does not agree with its bizarre decision to name the rhino as the newsmaker of 2012.
The announcement by the NPC could have an impact on how the media is perceived in this country.
Members of the media and locals took to social networking site Twitter this weekend to voice their shock, anger and disbelief at the NPC’s decision. Valid questions have been raised about why the Lonmin killing was not named newsmaker of the year.
Press club chairwoman Antoin ette Slabbert justified their deci sion, saying rhino poaching in South Africa received extensive coverage last year – both nation ally and internationally.
She further said Lonmin, which was considered, was not a news maker but a news event with “many faces”.
The Dispatch is sensitive to the plight of the rhino and conserva tion efforts. However, we would not be true to our creed as a news paper for our community if we placed a greater human story – the story of those “many faces” – be low that of the rhino.
The Marikana massacre, in which 34 miners were killed during unrest in August last year, is an event that impacted on and changed the lives of many families in the Eastern Cape.
The majority of those killed were fathers, brothers and sons from this province who left home in search of a better life for their families.
There has been criticism of how miners protesting for a better wage conducted themselves, but one cannot turn a blind eye to the bloodshed that followed.
Those supporting the NPC argue they aren’t interested in more stories of politicians and strikes.
Regardless of the reasoning, South Africans cannot simply ig nore a mass killing in this day and age – not 19 years into democracy.

The Daily Dispatch cartoon published on 21 January criticises the National Press Club’s decision to name the rhino as the newsmaker for 2012. 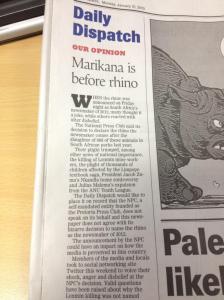 Categorised in: General, In the news