Home › Activism › Why I won’t respond to your tweets about false rape accusations
Follow Michelle Solomon on WordPress.com

Disclaimer: Read this fantastic post by Lauren Nelson on American false report data. It was such a great idea that I decided to mimic it with our own data that’s available. Nelson makes brilliant points, so I will be copy-pasting her brilliance here (see the green text). I will get into this in more depth when I have a chance and write a more eloquent post.

This study is the most reliable study we have in South Africa into how prevalent false rape reports may be. While the study focusses on Gauteng, the team that produced this are currently working to do the same study nationally. Until that study is completed, this is the best data we have on rape case attrition and false rape accusations. According to the study, 3.3% of rape reports may be false accusations (see page 43). That’s 3.3 false accusations out of every hundred rape cases, and it looks like this: 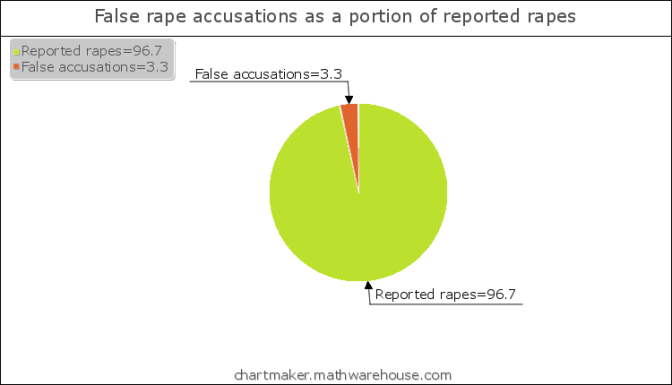 Here’s the next problem though – that’s only about reported rapes. In order for false accusations to be the pervasive counter-cultural revolution some claim, it would have to be a significant portion of all instances of rape. After all, if we’re looking to measure misery, we should make sure we have context.

According to the Medical Research Council, only 1 in 9 women report their rape. What does that mean for the false reports? Well, false rape accusations that end up at the cop shop make up less than a percentage of all rape in South Africa. What does that look like?

Just to clarify: This is based on a projected rape frequency using the most up to date report rate of 1 in 9.

As Nelson put it – this number is far from justifiable as an interruption to the discourse about rape and how we relate to the issue and can support rape survivors, and she got 3%. While our limited data means I have to stop here (but I believe I’ve made my point), Nelson takes it further:

I know this is all conjecture. It’s an exercise. Stay with me.

So if the percentage of reported cases with false accusations is measured at 4%, how does this egregious harm compare to the big picture?

Since we already got less than half a percentage with the South African data available, can you imagine how small a number false rape accusations actually make up? Pretty much non-existent.

And that, dear readers, is why I will not have discussions about rape, reporting rape and rape survivors’ rights be constantly hijacked. Yes, false rape accusations do considerable damage, but we cannot keep focussing on something that only effects less than 1% of people who are adversely affected by rape. To suggest that we constantly focus our attention on that 1% instead of the vastly bigger problem that people are not reporting their rapes is patently absurd, as well as callous and, yes, a perfect example of rape culture at work.

But wait, wait, wait! You might say. What about that one report with the DNA thing?

Oh, you’re talking about that adorable Fox News article with about as much merit as their “fair and balanced” mantra? Let me break it down:

All this means that people who tout false rape accusations as a critical element of establishing balance in rape culture discussions are equating the suffering of a statistically minuscule portion of the population to a (probably understated) massive population of rape victims.

Guess what? THAT IS RAPE CULTURE.

The idea that we must pepper discourse on the suffering of the marginalized by bemoaning comparatively insignificant harms suffered by the group that has historically had a cultural and institutional advantage in the legal system reeks of privilege.

The fact that false accusations are perpetually injected into accounts of substantial grief as an equal comparison is a distraction at best, and offensive more often. It is the equivalent of saying, “Rape is terrible, but…”

No – there is no “but.” Rape is terrible, and that statement needs no caveat.

While that is the righteously indignant response that comes to mind when I look at this data, when the temper has cooled  and I attempt to be objective, I’m not entirely comfortable with this line of reasoning. I would not want to silence the voice of a victim of admittedly rare female-on-male rape just because they were representative of a very small proportion of the sexual violence victim population, and I don’t like the idea of doing that to other people who have suffered an injustice, either.

So while I feel like the comparison of false rape accusations to the extensive harms of rape culture is a bad one, that’s not why I’m refusing to publish comments bringing it up.

The reason is that this comparison has struck fear into the hearts of sexual violence victims for decades. It makes victims feel as though they won’t be believed if they do come forward. It gives rape culture perpetrators the “backing” to say a victim “wanted” it, or changed their mind because they were embarrassed. It gives the most vile of commenters their “grounds” for claiming a victim was “obviously” lying because so-and-so could have “anyone they wanted.”

That doesn’t help rape culture, but more importantly, that doesn’t help the victims. Coming forward can be important to receiving proper medical treatment, counseling and – should they choose to press charges – justice. And it can be the difference between putting a rapist behind bars, or allowing them to rape again. I don’t want to be a part of a culture that does that.

The reason is that – for better or worse – those concerned about false rape accusations have a heavyweight ally in their corner already: rape culture itself. The culture hand-delivers skepticism for any allegation that might be made. Victims, on the other hand, have no such ally in their corner. I’m not worried about giving those concerned about false rape accusations a platform, particularly if it’s going to continue to skew the odds against sexual violence victims by perpetuating rape culture overall.

To be clear, I don’t believe the commenters were intending to foster a hostile environment for discourse. I believe they were trying to make an argument, and either were unaware of the what their statements did in context, or don’t understand the gravity of the rape culture problem. In any case, my decision is made.

If you want to comment about false rape accusations, it won’t be on this blog.

The 0.4% of false rape accusations I have calculated above come to less than three minutes in every hour. It comes to 2’24” to be exact.

And my minutes are up.

If you want to talk to talk about false rape accusations, it won’t be on my Twitter TL.

Categorised in: Activism, Opinion, Why I didn't report, Writing

« Who “let’s rape happen” in South Africa? [TRIGGER WARNING]
My rape as “alleged” »