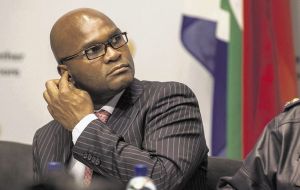 Researchers at the Institute for Security Studies (ISS) told the Daily Dispatch in an exclusive interview, that the calculations presented by Mthethwa were wrong.

Democratic Alliance shadow minister of police Dianne Kohler-Barnard also said she believed it was a deliberate attempt to hide the sorry state of crime in the country.

According to ISS senior researcher Lizette Lancaster, the figures sidestep a dire reality.

Read more in the Daily Dispatch.

According to ISS senior researcher Lizette Lancaster, the figures sidestep a dire reality.

Lancaster told the Dispatch that the major fault in the comparative statistics was a change in population size used to calculate the rates of crimes.

The ISS said earlier in a statement that for the first time in six years there was actually an increase in both the number of murders and in the rate of murder.

Lancaster told the Dispatch she believed the 2011-12 stats were calculated using 2011 mid-year population estimates based on the 2001 census data, which had the South African population at roughly 50.6-million.

The statistics released today, however, were calculated using the 2012 mid-year estimate based on the 2011 census data, which puts the South African population at roughly 52.3-million.

The jump between the two population sizes used to calculate the statistics presented by Mthethwa served to slant all the statistics in a “more positive light”, Lancaster said.

It pushed the increases in crime up, while also pushing the decreases down.

Mnisi did not account for the increases and decreases in categories of crime presented by Mthethwa – figures which depend on population differences between 2011-12 and 2012-13 crime rate figures.

During the annual crime statistics press conference, the minister claimed sexual offences had decreased by 0.4%.

Lancaster said that this meant that where Mthethwa claimed sexual offences in South Africa had decreased by 0.4% in comparison to the ratio of the year before, they in fact had increased – by 1.5%.

The same can be said for murder.

She explained the figures released should have included re-calculated 2011-12 crime ratios based on the 2011 census data.

“This would have prevented any confusion with regards to the actual increases and decreases, rather than those reported by the Minister,” she said.

“They should not have compared the two years the way they did. Instead, they should have provided actual ratios and let us decide the real increases.

“The way the calculations were done, two million people were not accounted for in the 2011-12 statistics,” she said.

Lancaster would not comment on whether she believed the inaccurate calculations were a deliberate attempt by the Police Minister at misleading South Africa.

“At the very least this is a misrepresentation of these statistics. They have compared apples and pears – you can’t give increases and decreases based on a two million person population discrepancy.”

“One cannot believe that the South African Police Services would do such a thing deliberately to fool the public into believing that the crime situation is looking better than it is,” she said.

“What I can say is that it is really unfortunate that the police don’t present South Africans with the truth,” Lancaster said.

Kohler-Barnard said: “I will not believe this was merely a statistical blunder. It is a cold, clinical attempt to hide the reality of crime in South Africa.”